My Macbook pro went in the shop again, and instead of spending $100 to rent another one, I spent $300 to buy a cheap, crappy Toshiba laptop at BestBuy. It was not a fun experience, but the laptop worked as well as one could expect. Vista is actually as bad as they say, but mostly only in the networking – of which I do alot, so I am a bit biased.

So once I got my craptop what would be the first thing that I would do! But try to install Braydix. Alas, ’twas not so easy…

First off, the CDROM detection code wasn’t being ‘patient’ enough to let the drive spin up. I worked around this by manually walking through the boot code and typing it line-by-line…all 30 or 40 lines of it. Not fun. It would then crash in some other spectacular manner, later on. But I did notice the terminal window coming up very quickly 🙂

So I knew I had some real work to do once I got my Macbook back (upon which my development environment for Braydix lives).

First, I made the CDROM detection more patient – well, instead of making it patient I made it insistent. It keeps looping around and around until it finds what it needs to boot from. Which may be forever, but if so, too bad. Poor computer. Turns out that Craptop would end up finding the CD around the third pass or so through the loop. OK, fine.

Having burnt around…oh, 2 or 3 CD’s for the purposes of booting from, I was now thinking that it might be nice to boot from a handy-dandy USB memory stick I have hanging around, so I don’t keep wasting CD’s. Especially since I have the image around 32 MB, with some crunching and caution, I bet I could get it to fit on a 32MB USB memory stick. So that required some rejiggering, and I made my development environment better in the process – so everybody wins. Now we can boot off of USB, and Boot from FAT filesystems. (edit – just found some stuff to yank – 31MB FTW…edit 2 – oh, and I had to add more stuff, so now 34 FTL 🙁 )

In the course of doing my boottime diagnostic, I couldn’t remember what the various boot functions I had created were for. I had to go read the config file to figure out. That sucked, so I also made a little menu (only shows up if you hold down Shift while the system is booting. This is diagnostic Wizard stuff, not even power-user stuff for the most part).

Two important things – this boots to a terminal window, not the browser. This is a placeholder for eventually making some kind of launcher-thing.

To finally get the craptop to actually work with this stuff for WiFi, I had to dig around to figure out the WiFi story. Apparently, it’s WiFi chip is a USB based one…whoops! So I had to add all kinds of terrible and crazy USB device detection, etc, etc. Not at all fun.

I rewrote a huge chunk of CREST-fs, the internet filesystem upon which the bulk of the rootdisk lives. It performs much better and is more aggressive about pre-fetching things that will help it later on. I enjoyed deleting lots and lots of complicated code, best feeling as a programmer, when you’ve out-eleganted yourself at something.

I created a ‘config’ directory scheme that persists across reboots (living on your hard disk, actually) for things like WiFi passwords. Who wants to keep typing those in?! I eventually imagine that I might store video display resolutions and other such ‘little, trivial, machine-specific’ things in there. Maybe the root URI of your home directory (*NOT* your password! Too dangerous!)

I think I’ve come up with a new name which I’m not going to share yet, but I’m still simmering on.

I don’t know an easy way to make a USB bootable flash disk. This is the method that works for me, on a mac. I attach my USB-key thingamadojie. I go into Disk Utility. I tell it to unmount (Not eject!) the partition. I go into terminal and say dd if=whatevermydiskimgis of=/dev/diskBLAHsBLAH (My Mac chose /dev/disk1s1, but Disk Utility should tell you for certain). For some freaky reason, even though the partition sizes do not match, this seems to kinda work. Don’t ask me. Your USB key must have an MBR partition scheme (pretty much standard), ‘normal’ MBR boot code (also kinda standard?), and EXACTLY ONE partition marked as ‘active’ (fiddle with fdisk -e to make this so, should show up with an asterisk). Apparently, according to what I’ve read, this is how USB key flash diskey things come from the store, but YMMV. This blows out your entire partition. This can fit into 35 MB or so, but it will make the math look funny – e.g. “256MB drive, 34MB in use, 1MB available”. That’s expected. There are other ways to do this with DOS exe’s and other such crap that I really don’t want to mess with, so suck it up, too bad! 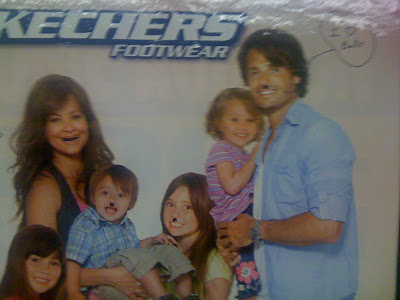 I think it’s the baby that does it for me, but I do enjoy the word bubble, which isn’t very clear in my poor photograph – it says, “I <heart> balls.”